People tend to dismiss English as a soft subject, devoid of any hardcore analytical thinking. Billy Collins’ Introduction to Poetry (a poem itself, not a textbook) even seems to eschew a rigorous approach to literature, lamenting that the students are “beating [the poem] with a hose” to “torture a confession out of it.”

I’m not advocating beating anything with a hose here, but the parts of English class that I’ve particularly enjoyed have been the more tangibly academic parts: learning new vocab words, looking up Greek/Latin/French roots, and of course, learning the terminology for literary devices.

What are literary devices? Writers since antiquity have employed many clever tricks for dressing up their language, from plain old repetition (ok, we can be fancy and call it anaphora) to the clever use of a verb called zeugma.

When I took an English elective on poetry in 11th grade, we had to learn a list of literary devices and be prepared to identify these devices when they appeared in the poems we read. But it was more than a simple game of “I Spy”–in addition to identifying the device, you had to comment on how it was advancing the mission of the poem. For instance, “The enjambment in the second stanza reflects how the speaker’s emotion is spilling over its normal constraints.”

I loved coming up with reasons that the author was using a particular feature of language! And I also believe that these literary devices prove that English can be a rigorous subject, fostering critical thinking skills.

I decided to make an app that enshrined this feature of English that I enjoyed. Device-O! furnishes examples of the literary devices in action, and it is up to the student to guess the device (or press a button to reveal the answer): 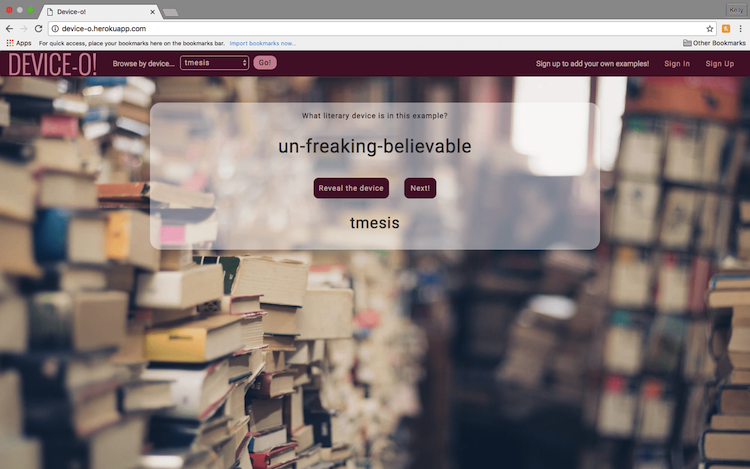 Students can also browse by device with a drop-down search menu. As seen in the code below, the drop-down options are drawn from an array that first collects the poetic device from every example, and then makes sure each device is only listed once by clearing out duplicates with Ruby’s uniq method. For good measure, the options are alphabetized, and the topmost option, “alliteration” is manually assigned to be the default.

In the second half of the code, the index page checks to see if the user has selected any of the options from the dropdown menu. If so, the page will show a list of examples with the selected device. If no params are detected in the URL, all devices are listed. The index page is different from the root page, which shows a random example and gives the student a change to guess the device.

If you made an account, you could add more examples of devices. In my vision, teachers would add examples and refer their students to this website. I wanted to prevent students from going on and vandalizing the site with inappropriate examples, so I thought account creation would be an okay deterrent. (If I were a student, I would have definitely wanted to add my own “hilarious” examples to the mix.)

Finally, the name Device-O! is a bit misleading. This app has nothing to do with Bingo! But it’s a nod to my awesome 11th grade Poetry teacher who introduced us to these devices and did indeed play a Bingo-type game called “Device-O!” with us.